What Is Auricular Acupuncture ? 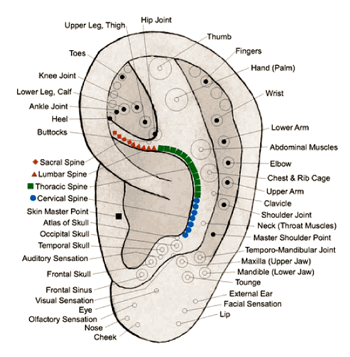 Auricular acupuncture is the stimulation of acupuncture points on the external ear surface for the diagnosis and treatment of health conditions in other areas of the body. The ear holds a microsystem of the body, consistent with the brain map discoveries of Canadian neuroscientist Wilder Penfield. Dr. Penfield found that maps of the body exist on the surface, or sensory cortex, of the brain. This same brain map is also projected onto different areas of the body, "microsystems", and in particular precision, onto the ear.

Ear acupuncture has proven to be an efficient method of treating a wide variety of conditions, from headaches and allergies to addictions and pain disorders. Although acupuncture evolved in the context of Asian medicine, the specialty of ear acupuncture was developed in western Europe. It's foundations laid by Dr. Paul Nogier, a neurologist working in France in the 1950's, it was deepened and expanded by Frank Bahr M.D. and physical medicine specialists in Germany over the following decades.

The map on the ear is in form of an inverted fetus with all the fine details of the anatomical, physiological, and emotional body represented. The tissue of the ear is unique and has functions in addition to our sense of hearing. The ear is the first organ to develop to its full size and become fully functional about 18 weeks after conception and is one of a few anatomical structures composed of tissue from each of the 3 primary types (endo, ecto, mesoderm) in the developing embryo. 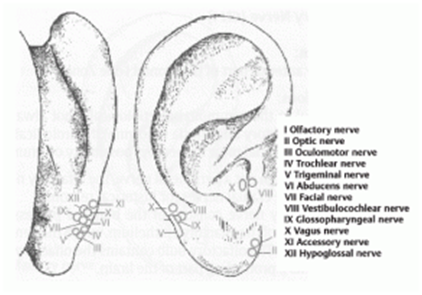 The earliest use of ear acupuncture, like body acupuncture, dates back to ancient China. Auricular acupuncture as we know it today however is largely the outgrowth of work begun by Dr. Paul Nogier, a neurologist trained in acupuncture. He found that the ear holds all of the acupuncture points of the body plus more detailed physiological and anatomical correspondences and found that stimulation of these points were very effective in alleviating pain and other symptoms. When an auricular acupuncture point on the ear is "active" it expresses as increased tenderness on stimulation and a higher electrical conductivity. This indicates pathology in the corresponding body tissue or function and makes auricular acupuncture a useful form of assessment of ailments. The texture, colour, skin changes, veins, etc., in different areas of the ear can be indicators of the state of health. 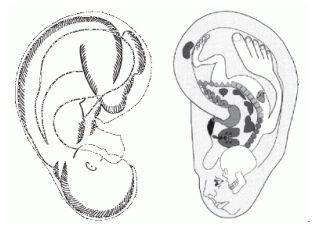 Treatment is performed by needling the respective points on the ear and, if necessary, also on the body. Disposable surgical stainless steel, or gold or silver plated, needles are used. They are inserted only millimetres under the skin. Small 'beads' - metalplated, magnetic, or vaccaria seeds - are often placed with adhesive plaster for longer lasting stimulation. Children are usually not needled but treated with laser or ear 'beads' instead. All signals induced by ear acupuncture travel through a specific part of the brain, the diencephalon, to the corresponding body parts. The body strictly obeys these commands because they come straight from the brain. Thus ear acupuncture takes advantage of the body's own control center, the brain. All diseases that can be traced back to a disturbed, but not destroyed, organ function can be treated by ear and body acupuncture: migraine, insomnia, depression, addictions, indigestion, autonomic symptoms, most conditions of pain and inflammation. Some patients feel immediately relieved, others need several days before they notice an improvement. Some people feel as if they were walking on air after treatment, and almost all feel very relaxed.

The use of ear acupuncture in trauma and disaster 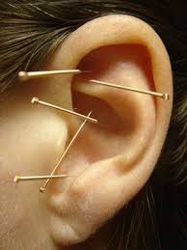 "Community-style" acupuncture is well suited to group treatment conditions faced in disaster settings. Treatment is easily integrated into a wide range of settings: hospitals, outdoor clinics, on a curb side, etc. The volunteer group, Acupuncturists Without Borders, provided support to both relief workers and victims in the aftermath of Hurricane Katrina in New Orleans and at St. Vincent's Hospital in Manhattan in the fall of 2001. Treatments are easily given while people are fully clothed. A set protocol developed for use in addiction treatment programs through the National Acupuncture Detox Association (NADA) is an effective way to help people facing enormous stress, anger, depression, fatigue and other emotional and physical pain. It has been used in thousands of programs around the world. Those receiving treatment do not have to wait to feel its impact, as relaxation generally occurs within minutes. Survivors of traumatic events report ear acupuncture to be useful in alleviating symptoms of Acute Stress Disorder. Recipient surveys show increased mental clarity, ability to cope, alertness, ability to sleep, reductions of pain and muscle spasm, depression, anxiety, and intrusive recall. These simple acupuncture treatments can have a calming and transformative effect without requiring the traumatized client to talk. They can be in a state of extreme dissociation and still benefit. 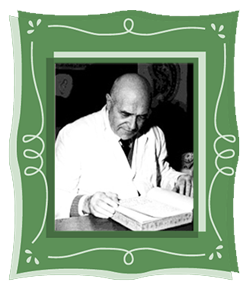 Auriculotherapy was conjectured by the French neurologist Paul Nogier, who published his results in 1957 with his Treatise of Auriculotherapy.